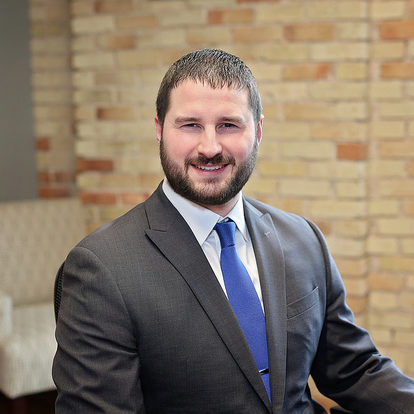 David J. Busscher joined Henn Lesperance PLC in October 2016 after beginning his legal career as a Research Attorney with the Michigan Court of Appeals. He graduated in the top 10% of his class at the University of Illinois College of Law, where he was also a member of the Order of the Coif, an Associate Editor of the Elder Law Journal, and a recipient of the Rickert Award for Excellence in Service.

Mr. Busscher strives to provide exceptional legal analysis, wise counsel, and zealous advocacy for our clients. Mr. Busscher is committed to practicing law with professionalism and integrity, recognizing that even in the most factually contentious cases our clients are best served by treating opposing counsel and parties with respect. Although he enjoys the opportunity to fully litigate a case, he seeks prompt and favorable resolution of claims for our clients at every stage of litigation.

When not practicing law, Mr. Busscher enjoys spending time with his wife and children, traveling, and playing outdoor sports. Mr. Busscher is also actively involved in his church as a deacon, praise team singer, and children’s programs volunteer.

July 2020: Dismissal Obtained.  Successfully obtained stipulated dismissal following denial of Plaintiff’s emergency motion for a temporary restraining order and preliminary injunction.  Plaintiff alleged he was entitled to immediate injunctive and declaratory relief because he was in hospice care in an assisted living memory care facility but the facility did not allow indoor or non-socially-distanced visitation.  The defense established that an emergency TRO and preliminary injunction were not warranted because the facility’s visitation policy was soundly based in Covid-19 guidance from the State of Michigan, CMS, and the CDC.

September 2019, Dismissal Obtained.  Successfully obtained dismissal of pro se lawsuit against several defendants, including an emergency physician, a psychiatrist, and a hospital.  Plaintiff alleged medical malpractice, violations of mental health patient civil rights, and police misconduct and negligence arising from her involuntary psychiatric treatment provided by the defendants.  The defense demonstrated that that Plaintiff failed to follow the procedural requirements for a medical malpractice claim, failed to effect proper service on some defendants, and failed to state a claim on which relief could be granted.

June 2019, Summary Disposition Granted.  Drafted and argued successful summary disposition motion resulting in dismissal of all claims.  Plaintiff alleged that a platform scale in a hospital PACU hallway was negligently placed, constituted a legal nuisance, and created a dangerous condition on the premises.  The defense demonstrated that Plaintiff’s only legally cognizable claim sounded in premises liability and then established that the open and obvious nature of the scale precluded liability.

January 2019, Summary Disposition Granted.  Drafted and argued successful summary disposition motion resulting in dismissal of all claims.  Plaintiff alleged that an ambulance service and its employees were negligent during their transportation of the patient, resulting in injuries to the patient.  The defense relied on immunity granted by the application of the Emergency Medical Services Act and demonstrated that no question of fact existed regarding any viable claim of gross negligence.

October 2018, Successful Appellate Reversal.  Drafted summary disposition motion that was denied in the trial court but then drafted appellate briefs that obtained reversal of the trial court’s decision and resulted in dismissal of all claims against the road commission defendant.  The case, Schrock v City of Linen et al, unpublished opinion per curiam of the Court of Appeals, issued October 25, 2018 (Docket No. 340759), concerned a jurisdictional dispute and the application of governmental immunity.

August 2018, Summary Disposition Granted.  Drafted and argued successful summary disposition motion resulting in dismissal of all claims.  Plaintiff alleged a slip and fall premises liability claim concerning a fall on an outdoor sidewalk at a nursing home during the winter.  The defense demonstrated that Plaintiff failed to provide evidence of actual or constructive notice of the alleged hazardous condition, such that the claim against the nursing home failed as a matter of law.

April 2018, Summary Judgement Granted.  Drafted and argued successfully federal summary judgment motion resulting in dismissal of all claims.  Plaintiff sued a police officer, hospital, and various individual medical providers alleging Unconstitutional Search and Seizure, Excessive Force, Interference with a Family Relationship, Assault, Battery, and False Imprisonment.  Specifically, Plaintiff claimed that Defendants wrongfully provided care and treatment for suicidal ideation to his minor daughter against his will.  The defense argued that the hospital defendants were not state actors, that even if they were they would be protected by qualified immunity, and that the state law claims were baseless.  The Court agreed that qualified immunity applied for the federal claims and dismissed the state tort claims.

August 2017, Dismissal Obtained.  Successfully obtained dismissal of bizarre pro se federal lawsuit alleging numerous claims against over a dozen defendants, including a hospital and several hospital employees.  Plaintiff was a “sovereign citizen” individual who believed most laws did not apply to him and who had allegedly been forcibly removed from a hospital during or after the birth of his son.  The defense argued that Plaintiff failed to state of a proper claim, and the Court held that Plaintiff’s pleadings and filings were so disjointed and confused that they failed to properly raise a federal question and must be dismissed for lack of jurisdiction.